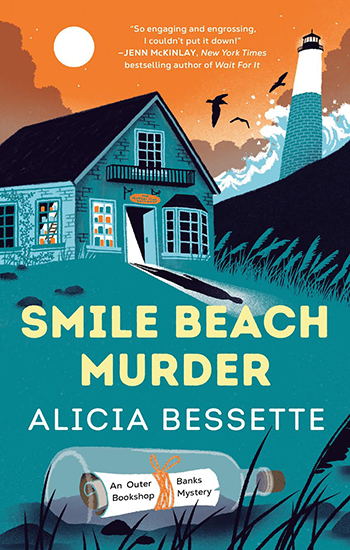 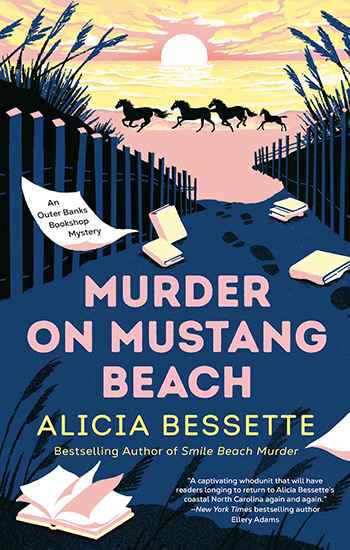 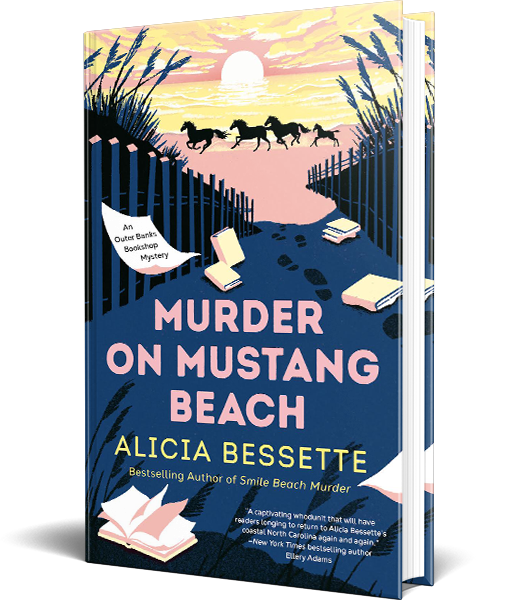 When a killer stirs up trouble in the Outer Banks, amateur sleuth and bookseller Callie Padget is on the case, in a new beachside mystery from bestselling author Alicia Bessette.

Cattail Island in the Outer Banks is a popular destination for honeymooners and nature lovers alike. So it is a huge blow when the murder of a newlywed grinds the pre-summer season to a screeching halt. Bookseller Callie Padget launches her own investigation, after mysterious customer Geri-Lynn Humfeld, caretaker of the island’s protected wild horses, brings in an irresistible piece of information.

Determined to restore order and safety to her beloved hometown, Callie searches for answers—even as those answers cast suspicion on her soon-to-be boyfriend, Toby Dodge, whose martial arts studio was the scene of the crime. As she digs deeper, Toby becomes the police’s prime suspect. The truth raises troubling questions and sends her scouring the bookshop’s shelves for guidance.

Meanwhile, a well-loved member of the mustang herd—a pregnant mare whose anticipated foal is a symbol of summery hope for locals and visitors alike—may be facing dire circumstances. With help from Geri-Lynn, Callie unearths startling secrets surrounding not only the compromised mare, but the murdered newlywed, too. And when another body shows up, this time on isolated Mustang Beach, she must race against time to stop a killer from claiming any more innocent lives. 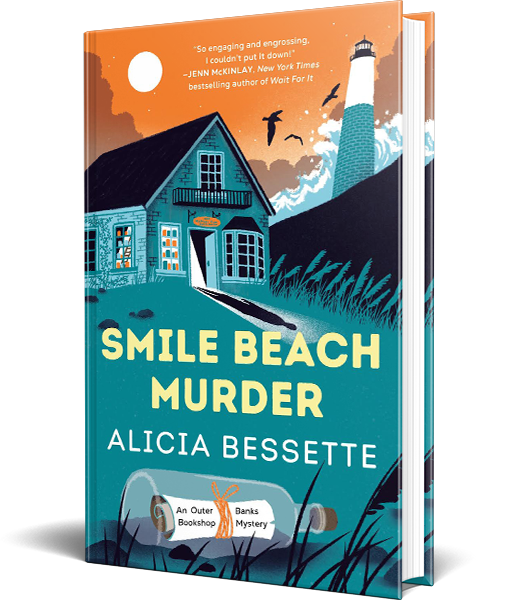 From bestselling author Alicia Bessette comes an all-new mystery series featuring Callie Padget, a former reporter turned bookshop clerk on the Outer Banks who is pulled into a deadly web of secrets when a mysterious fall at a lighthouse echoes a tragedy from her past.

When Callie is laid off from her reporting job, she returns to her hometown of Cattail Island and lands a gig at the local bookstore—the same one where she found comfort after her mother died.

In fact, the anniversary of her mother’s infamous death is approaching. Years ago, Teri Padget tumbled from the top of the lighthouse. As islanders are once again gossiping about the tragedy, devastating news strikes: the lighthouse has claimed another victim. Eva Meeks, of Meeks Hardware.

The police are calling it suicide, but Callie does not believe Eva jumped any more than she believes her mother did—especially because Callie knows that before her death, Eva had dug up a long-forgotten treasure hunt that could have put a target on Eva’s back.

In Callie’s search for answers, she enlists the help of some beloved books and several new friends, including handsome martial arts instructor Toby Dodge. But when another death rocks Cattail, Callie must face her fears alone. Earning enemies in pursuit of the truth, she will either uncover the killer—or become a victim herself.

Nominated for an Edgar® Award
One of Real Simple’s Best Beach Reads of 2022
An Amazon Editors’ Pick for May’s Best Mysteries, Thrillers & Suspense series
A Cozy Book of the Month selection at the legendary Poisoned Pen Bookstore

“Readers will finish Smile Beach Murder cheering for Callie and eager for many more cases to come.”
—BookPage

“The perfect mystery to kickstart your summer … thrilling.”
—FreshFiction

“A must-read for all mystery lovers … so engaging and engrossing, I couldn’t put it down!”
—Jenn McKinlay, New York Times bestselling author of the Library Lover’s mystery series

“Alicia Bessette’s gift for description will transport you to Cattail Island and the salty air of coastal North Carolina. [A] must read!”
—Lorna Barrett, New York Times bestselling author of the Booktown mystery series

“Smile Beach Murder had me on the edge of my seat!”
—Peggy Rothschild, author of the Molly Madison Dog Wrangler mystery series